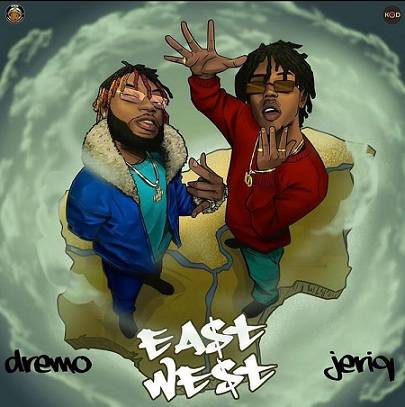 
Don't miss this record, from Jeriq and Dremo, tagged "East To West".


Emerging Nigerian music crooner, from the East, Jeriq disbursed this enchanting record called "East To West", will vocal support from DMW rap star, Dremo, who adds his undying flows to blend this Hip Hop house record. It was from the extended play tagged "East To West", this vibrant record, was obtained.

East To West, appeared as the third record off Jeriq and Dremo, collaborative extended play "East To West", an impressive body of work, which bagged five solid and dope tracks, Jeriq and Dremo, use to kick off the year 2021, after a long hiatus in the music domain.

Jeriq has made his name for himself, after his collaboration with Phyno, on the record called "Remember (Remix)", which was a massive hit. Some of his hit records are, "No More Nleka", "Last Last", "Update" and many more. This latest record "East To West" is a must-listen. Jayswaarg-produced record, gets Jeriq and Dremo, switching flows and some vital punchlines. You will surely love this record.

Listen to Jeriq East To West Mp3 below!

Share Jeriq - East To West ft Dremo Mp3 with others on;